If you are interested in becoming a successful poker player, then you should definitely spend some time learning more about poker hand ranking. This advice is useful for almost every type of poker including Texas hold’em poker. In this article, we will explain all 5-card poker hands starting from the best hand in this casino game – the royal flush – all the way to so-called high hand cards that don’t have a pair. Try to memorize this hand ranking list and enjoy playing!

five cards that belong to the same suit in a row starting with an Ace as the highest card. Keep in mind that this is the strongest hand ranking in poker.

five cards that belong to the same suit in a row.

a poker hand that consists of five cards – three of a kind and a pair. In case more than one player has a full house, the poker player with three cards that have the highest value wins. Once again, the winner among two or more players with identical three cards (multiple decks use) will be determined by checking the value of the pair.

a poker hand like this comes with five cards that belong to the same suit, but without any particular order. If there are two flushes, the poker player that has the highest ranking card wins.

five cards in a row that consists of cards from at least 2 different suits. If there are a few players with a straight, the player that has the highest cards in the row is a winner.

Three of a Kind –

in simple words, three cards that belong to the same rank. The remaining two cards don’t have the same value or rank. Some people call these poker hands sets or trips. In a situation where more than one player has three of a kind (in case there is more than one deck in play), players use kickers to resolve the tie.

once again, we don’t have to explain a lot to help you get familiar with this poker hand. In case you have a hand like this, you simply have two different pairs of same cards with the same value. Obviously, if there is more than one player with two pairs, the one that has the highest ranking pair is a winner and if two or more players have a pair with the same value (if there is more than one deck involved), the kicker will show the winner.

a term used to describe any five card hand where one of the players has a higher card. So, there is no hand, and the player with the highest card is a winner.

See all in This Pic: 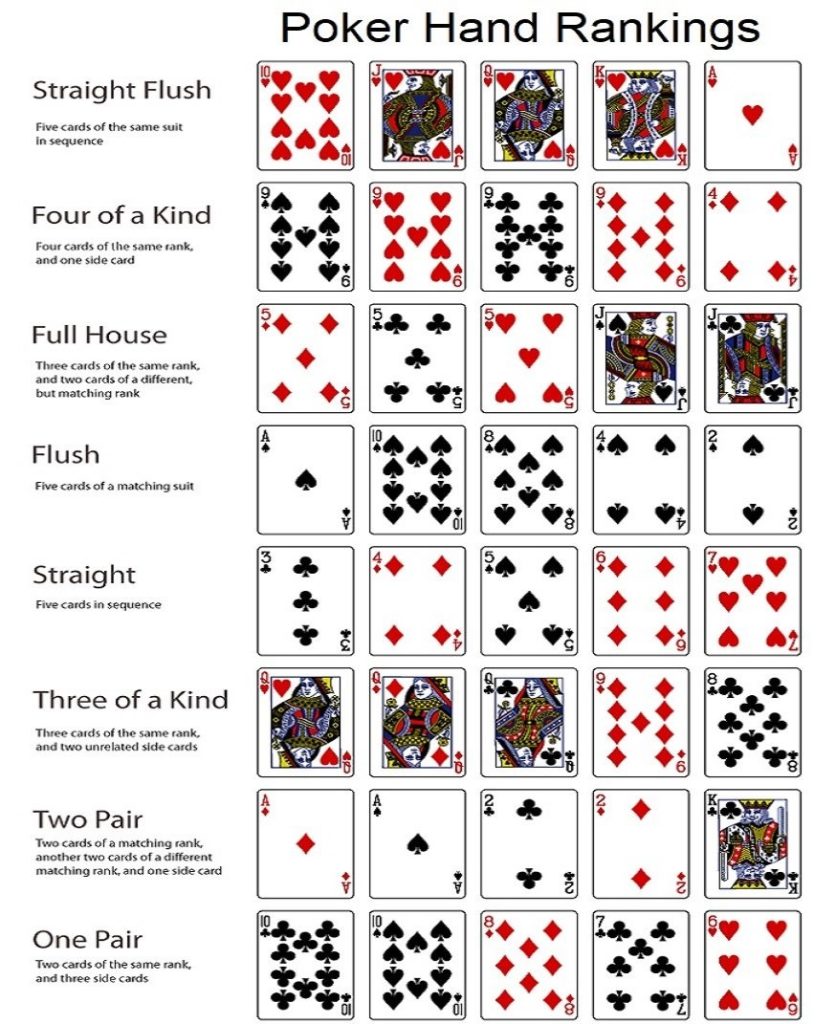 Other Important Rules for Poker Hands

As we said before, there is more than one type of poker out there, but poker hands are more or less the same, so these poker rules are universal: